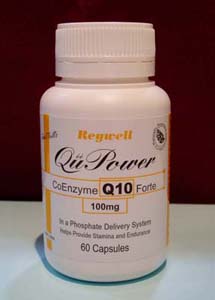 What is CoEnzyme Q10

Coenzyme Q10 (CoQ10) is a vitamin-like substance that is found in every cell, hence the ubiquinone. It is necessary in energy production in the 70-100 trillion body cells. Research conducted in the 1960s and 1970 showed that CoQ10 acts as one of the major antioxidants and plays a central role in mitochondrial oxidative phosphorylation i.e. it is vital for the enzyme systems involved in the 'powerhouse' of the cell (mitochondria).
Thinking of these cells as tiny engines, CoQ10 provides the "spark" that initiates the energy generating process within cellular mitochondria. Only CoQ10 can serve as this vital "spark" in the human bio-energy system. Without CoQ10 then, no cellular energy can be produced. Hence, life won't exist.

CoQ10(2,3-dimethoxy-5- methylbenzoquinone) is chemically classified as a quinine ring attached to 10 isoprene side units. It is found in relatively higher concentrations in body cells with high energy requirements, e.g. heart, liver, muscle and pancreas. Body cells make CoQ10 from tyrosine, in a multiple-step aromatic pathway, requiring sufficient levels of nutrients such as folic acid, niacin, riboflavin and pyridoxine. A deficiency of any of these nutrients would result in deficiency in CoQ10.

Electron Transport Chain (ETC) production of ATP (energy unit): CoQ10, located in the mitochondrial membrane, is the cofactor for at least 3 mitochondrial enzymes (complexes I, II and III). It is able to move and transfer electrons between flavoproteins and cytochromes. Each pair of electrons processed by the ETC must first interact with CoQ10. Hence, CoQ10 plays a vital role in adenosine triphosphate (ATP) of biological energy, production.

The importance of CoQ10 in cellular energy production, it probably has significant actions on all the major organ functions. Research is on-going to assess the benefits of CoQ10 supplementation in various health conditions.

Cardiovascular System: CoQ10 is highly concentrated in heart muscle cells, due to the high-energy requirements of this organ. In 1974, the Japanese authorities approved CoQ10 for use in cardiovascular problems, leading to its use by more than 12 million Japanese today. In addition, the use of CoQ10 has been advocated by healthcare professionals in the US and Europe.

Metabolism: Since CoQ10 plays a key role in the ETC, it could help improve stamina and alleviate impaired aerobic function associated with fatigue. CoQ10 is found in higher levels in the liver, an organ hat also has high energy requirements. Research suggests a key role for CoQ10 in the multiple functions of the liver, especially in energy production, metabolism and detoxification.

Musculoskeletal System: Lowered serum and gingival levels of CoQ10 have been documented in patients with chronic periodontal disease. Wilkinson et.al, reported that CoQ10 supplementation improved several clinical aspects of periodontal disease, including inflammation and tooth mobility. Since CoQ10 is concentrated in and involved in the functions of muscles, supplementation may reduce the extent of damage caused to muscles by very intensive exercise & athletic performances. Recent research has demonstrated that CoQ10 alleviates some symptoms of muscular dystrophy.

Nervous System: Scientists are currently investigating the efficacy of CoQ10 in reducing nerve damage in conditions like Parkinson's and Alzhelmer's disease.

Antioxidant: In addition to serving as an electron and proton carrier in the mitochondrial respiratory chain, CoQ10 also functions as a major antioxidant. It inhibits lipid and protein peroxidation and scavenges free radicals �V regarded to be involved in various disease processes and even aging. CoQ10 works synergistically with vitamin E, regenerating its active form, in the same synergistic mechanism as with vitamin C. Co Q10 is currently regarded as the only known naturally occurring lipid-soluble antioxidant that can be regenerated to its active form in the body.

Membrane Stabilization and Fluidity: The membrane stabilizing property of CoQ10 has been postulated to involve the phospholipids-protein interaction that increases prostaglandin metabolism. It is thought that CoQ10 stabilizes myocardial (heart cell) calcium- dependent ion channels and prevents the depletion of metabolites essential for ATP synthesis.

CoQ10 Supplementation: Exogenous supplies of CoQ10 are found in foods e.g. fish and organ meats. However, in some cases dietary intake may be inadequate to meet the body's needs. Research has documented an age-dependent decrease in CoQ10; peak serum concentrations occur at about 19-20 years and drop more than 60% by age 70. Other factors leading to CoQ10 deficiency include inadequate dietary intake, environmental stress, strenuous exercise and selected drugs, e.g. HMG-CoA reductase inhibitors including cholesterol-lowering medication block the synthesis of mevalonic acid, a precursor to cholesterol and CoQ10.

Are all CoQ10 Supplements the same.
With the vast scientific experience of the Japanese in CoQ10 production, a good source of pharmaceutical grade CoQ10 is from Japan. World wide, there are probable only a few companies than can manufacture A-1 grade CoQ10. The purity of the raw material and the process of extraction using bio-fermentation is an important consideration as far as quality is concerned.
Properly sourced CoQ10 and an efficient delivery system like phosphates are the keys to a superior quality product. According to a newsletter released by Vitamin Research Products, inc. of USA, If a product is being sold at a price that seems to be too good to be true, it probably is.
Natural CoQ10 produced by bio-fermentation has more hydrogen proton power, making it capable of greater electron-carrying capacity. Hence natural top quality CoQ10 is probably much more effective in its antioxidant and other actions.